JUST A LITTLE REMINDER THAT DONNINGTON IS ON THE WEEKEND AFTER THE PICNIC.

THERE ARE TO BE THE 20 MOST ICONIC AND INFLUENTIAL KIT CARS ON SHOW AND SCAMP IS INCULDED.MY YELLOW SCAMP WILL BE ON THE STAND AND THERE WILL BE VOTING THROUGHOUT THE WEEKEND WITH PRIZES AND TROPHIES TO BE GIVEN TO THE MOST ICONIC MARK.I KNOW IT'S ONLY A WEEK AFTER THE PICNIC BUT IT WILL BRING THE CLUB TO THE FORFRONT SO LET'S TRY TO MAKE IT BIG.

I will be there Saturday.
Chris


This is only a guide, check out the website just in case i have got it wrong

We'll be there one of the days. I have too much to do at the house and not enough spare weekends to spend the whole weekend there. Anyone going for the whole weekend is more than welcome to doss down at ours if they want (might be useful if the weather is a bit off).

Thats me,
floor space for one please.

wezgit daan saaf wrote: I don't know whay they don't allow camping on the infield,they do at Le-Mans!!

In a word, Planners!

Chris W arrived on Friday and parked his car up on the inside kitcar stand and his caravan in the camping area.

Saturday i arrived at 10ish and parked on our stand alongside Chris Y. Later on in the day Muttley and son arrived. Can you believe that they had a free ride in a sporty "thing" around a special course, Capt Slow did come back a bit worse for wear after the experience though.

Mk3GT (never to be seen) Rob arrived later.
One stand worth comment was the Anderson Cub (Moke kitcar) stand. They now have full IVA on the kits and are in production, starting about £6000. They also manufacture an extension to the 12" radius arms and are willing to sell them seperately Dave M is persueing this. The owner used to own a Scamp 18 years ago and was persueded to sell it to a German night club owner as a roof suspended display (minus engine)

I stopped the night at James house who (along with Jenson) then guided me back to Donnie the short/faster scenic way. Rick arr with blue Scamp and Thomas with his 6 wheeler turned up and also for a second appearence Rob Bland.

For free, kitcar drivers could view the cars inside the hall along with the Newark type stalls. All weekend there were funny little cars buzzing around the circuit which we could also watch for free. On the sight is also the Wheatcroft F1 museum, charting the progress of racing from the 30's to present day.
This was half price at £4 which was a bargain considering the vast amount of F1 cars.

I shall leave the sporting shananagans of the club members for someone else to relate.

We left Chris there for another night (the beers not free again) before he takes a slow drive back Darn Sarf tomorrow.

I had a good day.
The combination of clubs, show stalls and 750 club motor racing worked well.
Also chatted to the AMC Cub man.
If he can get an IVA pass why can't Andrew MacLean ??

Yes,what an event,as an exhibitor I got in for free anyway,but with a kit car driver camping it was a fiver,plus Complete Kit Car Mag layed on a free BBQ and free booze...............yes free booze to campers only. It ended up we were playing tug of war at midnight, and watched the fireworks from the folk festival just over the next valley.
During the day we had a big field of club stands,the hall which included all the usual stands plus the heritage stand (which included Yellow Scamp),and a tyre changing competition for a car...........yes, a car...........downside was you could either have the car or the equvalent value which was £23.50,so you can imagine the state of the car,a clapped out Renault Megane Coupe.
Ex 4X4 Rob and I ended up having a shoot out on the tyre changing stand having got the best time if 1 minute 16 seconds for most of Saturday then having it shattered to 59 seconds at the close of play.Sunday came and that time got beaten again to 55 seconds,so Rob and I managed to pip that to a brilliant 50.4 seconds to have it beaten again to 48 seconds.........and team Mechanics who beat us took the car!!
On top of all this there was all sorts of racing going on around the circuit which was also free to watch.Locust racing,the Saxo challenge cup,MR2's and lots more.
A good weekend,certainly worth a look at next year if you have the chance.

BELOW; A GREAT DEAL OF INTEREST IN THE RADIUS ARM EXTENSIONS; 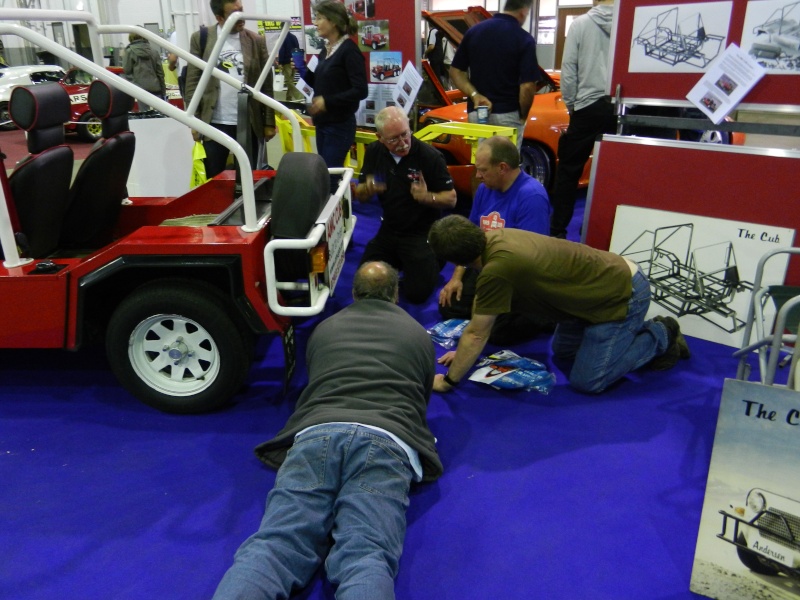 There i was just 'aving a kip, when these geezers stroll up and start talking about metally bits