Postcodes give you the street, OS grid references a 100-metre square.  Latitude and longitude are accurate to about 10 metres, if you are using the same global coordinate system, and can remember six numbers.  Enter whatthreewords.com - a (seemingly) clever way of addressing the world.

Essentially, the surface of the planet is divided into 3-metre squares, and each one is assigned three words from a database big enough to allow a unique combination.  For example, input.caring.brain takes you to the front door of 10 Downing Street.  Homophones such as chic/sheikh are not included, so no problem giving references over the phone.

I spy a new activity for imaginative people with too much time on their hands.  Will the losing.party.leader be sent to the wilds of Alaska after next Thursday?  Should the brainless.financial.misfits in charge of our banks be dumped collectively in the Sahara Desert, or individually in the Atlantic off the coast of Florida?  I suspect we'll see more of this sort of thing in New Scientist magazine's Feedback page.

Those of us at wheels.drape.cargo love it! Great fun playing about with it. 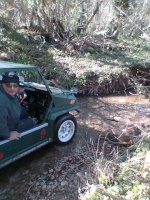