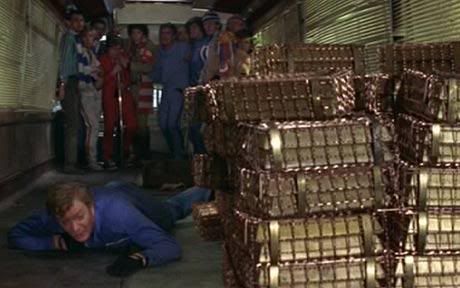 Hang on lads, I've got a great idea - lets remake The Italian job into a Bollywood movie.

I heard on the radio that Bollywood are thinking of filming a sequal to the Italian Job with references to the original and the remake.

Bollywood film outfit is planning to remake The Italian Job, in the process spicing up the cinematic mix with “lots of singing and dancing”, the Sun reports. The Indian Film Company secured remake rights from Paramount last year, and will replace the iconic Minis with Indian vehicles while taking elements from both the 1968 original and 2003 rehash. The company's Sandeep Bhargava said: “They are both very adaptable for Indian audiences, who like excitement.”

The 1968 film, which features a car chase through the streets of Turin and the legendary line "You were only supposed to blow the bloody doors off!", will be recreated with "lots of singing and dancing", Indian film chiefs have reportedly said. The Indian Film Company (IFC) has bought the rights to the film from Paramount Studios. The remake follows a 2003 version starring Mark Wahlberg, Charlize Theron and Donald Sutherland. The acquisition follows warnings by Hollywood studios against the previous practice among many Indian film companies of simply copying the plots of blockbuster movies with impunity.
Many American film studios now have offices in the country and at least one has taken out advertisements in the local press warning about copyright infringement.
According to Sandeep Bhargava, the Chief Executive of IFC, the Hindi version will borrow elements from both previous versions of the Italian Job. He said: "Italian Job is a thriller and we thought it had great scope if adapted for the Indian market."

The film is at present being scripted by director duo Abbas-Mastan, who are famous in India for action thrillers.

Not sure Mr. Bridger would be happy about this?

Similar topics
» I have a theory on how to produce BIG pike (following from the Italian geezers thread)
» Aces High (WWI Film)
» The Italian Secret to a Long Marriage
» Memphis Belle (Film)
» Italian Football ................. not so dead and buried.