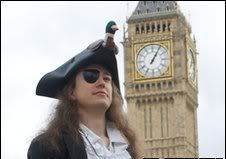 In the summer of 2009 ducks - or more specifically duck houses - were a touchy subject in Westminster.

But several months later one duck making regular appearances around London is proving to be a hit with the public. This duck is of the toy variety, and attached to a tricorn hat worn by Mad Cap'n Tom - one of the more eccentric parliamentary candidates standing for election in England on 6 May. While the main political parties have clashed over the economic recovery and electoral reform, Cap'n Tom is hoping his pledge to scrap tax on rum will help him become the first pirate elected to parliament. Unorthodox it may be, but Cap'n Tom's manifesto has helped him to win almost 5,000 supporters on the social networking site Facebook, along with nearly 2,000 followers on Twitter.

His other policies include training schoolchildren in "swordsmanship and gunnery", and fixing broken Britain by handing out free rolls of duct tape.

The pirate, who is standing in the Cities of London and Westminster constituency, has said he would use money raised from a 50% levy on all downloads of Cheryl Cole songs to fund his plans. "I can't stand her music," he explained. Despite his growing following Cap'n Tom rates his chances of success in the safe Conservative seat as: "Somewhere 'twixt a snowball's chance in hell an' zero." But a pragmatic outlook has not stopped the pirate - real name Tom Scott - taking time out from sailing the high seas to campaign in the constituency, where he said the response had been "wonderful". "I be gettin' smiles an' laughs from all round th' constituency," he said. "Except in the City. Somehow bankers an' other folks in suits not be appreciatin' a bloke wi' a duck on his head."

Solves all problems including camping:

Similar topics
» dorchester today
» Went Shopping Today
» how u became who u r today?
» got to use the plow today
» got our christmas tree today hoooray