Nice MK2 on the Bay

Nice MK2 on the Bay

The seller's done a full resto on it but I think he'll be lucky to get £2,500. Will set a new record if he does though. 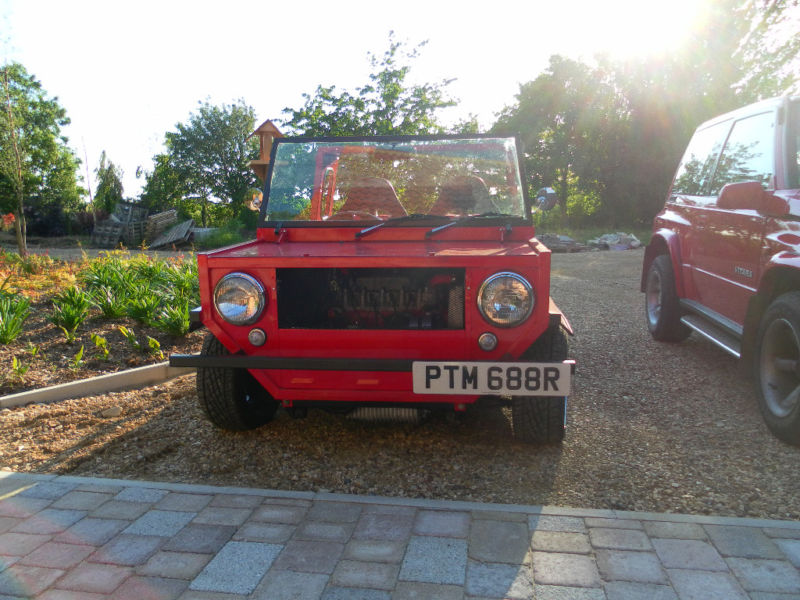 Seem to think it was yellow and bought off of e-bay earlier in the year. Looks to be still registerd as a Mini though

hi there sort of been a bit of a rubbish member, had very little access to internet and been flat out with work for the last few months sort of lived and breathed work and worked on this in the late evenings. its not turned out to bad i dont think, still more could be done but its at that stage were its nice in my opinion. it was that yellow one that was forsale in feb. i dont think its still rejestered as a mini of the top of my head sure theres a comment on the v5 will have to have a look. probably being optermistic with the price but i think its worth it there great little fun cars, plus already had 2k offered for it by the mot testing guy and hes a bit on the tight side normally so just testing the water really, i think these cars are sooo undervalued for what they are.

ps i would like to apoligise sincerly for not ringing about the doors, just couldnt see a forseable time when i would get chance to fetch a day turned in to week then turn in to a month then... sorry again.

It's back, still with a price tag that manages to seem both reasonable given the state of the car, and at the same time hopelessly optimistic.
Pity he didn't take the opportunity to fit a bigger engine.

It's been up pretty much continuously as a BIN for just under £2.5k since June. I almost emailed him to say take the £2k from his MOT tester as it would be the best offer he'd get. It's a shame in a way that Scamps are so undervalued but it does mean they're a source of cheap fun

keep getting offered cars for it minis mostly, but nevermind had fun in it lately chasing sunshine then running away from the rain lol. not really bothered if i sell it to be honest its good fun. if i have it still at winter then will be putting a bigger engine in it for next summer plus aload of other bits too.

Good idea, and we shall certainly look forward to seeing it, and your good self, at a few events maybe.

That's good news! Hope you're going to point them in our direction

ill point him in the direction of the group. think £2450 is a new high score, selling on ebay is rubbish listed it on a classic car website and it sold in an hour

i will be after another one in the new year when money is a bit more available, think im going to find out what you get if you put a scamp and a 2litre engine together, think it might be nippy

That's a very good price! Which website did you use?
I believe there's been a few Scamps over the years with 2-litres in them and James (TRR Motorsport) & Reg (Reg's Monster) have 1.9l MI-16 powered Scamps. What engine are you thinking of using?

OSR wrote:That's a very good price! Which website did you use?
I believe there's been a few Scamps over the years with 2-litres in them and James (TRR Motorsport) & Reg (Reg's Monster) have 1.9l MI-16 powered Scamps. What engine are you thinking of using?

just the first clasic car site i found, if you type classic car for sale in google it comes up. was thinking c20xe out of a calibra, built 2 in the past for other cars and they seem to be a good mix of speed and reliability. sale has gone through got the money and meet the guy monday to deliver the car. hes driving it to germany, its gonna be freezing. his answer was ill wear 2 coats lol.

henryb wrote: was thinking c20xe out of a calibra, built 2 in the past for other cars and they seem to be a good mix of speed and reliability.

Only worth doing in my opinion if you transfer all the good bits over to the Scamp, eg. suspension, brakes etc.....

Cut the mini subframe to take the engine & keep the mini suspension. The C14 i've used is smaller than the 1.8 & 2l blocks. The amount if subframe i've had to cut away and reinforce is criminal, resulting in quite a few subframe cracks & splits + weird suspension geometry over the last 2 yrs.

Plan on extending the front end, else you'll have no room for ancilliaries, alternator, air box, inlet manifold etc...try & graft as much of the front suspension as possible or at least fit coilovers into the mini subframe.

If they're of any help.

Have a god look at the Watsons Rally subframes - wouldn't recommend buying one though as they are overpriced and I think poorly designed and made - but good for pointing you in the right direction.

I have to agree with Reg. Neil's 1.4 Vauxhall lump works nicely in a MK2 but a 150BHP XE on Mini running gear would be a nightmare.

Especially when you junk the useless single plenum/restricted inlet manifold for dialed-in BP285H Cams, a pair of DCOE 45s on 36 chokes, 450 grams off the flywheel and you loose the steel TDC trigger wheel for an alloy trigger wheel front pulley. Mount it to a straight cut F20 box and plate diff and you have a nice little 210-215BHP animal at your disposal