Only a few inches here at the mo, but that's still a good enough excuse to go rallying down the lanes later tonight.

Are you getting plenty to play in?
Elaine&Reg.

There's enough to go playing in down here. Trying to road test black cabs is exciting in the snow I can tell you that much

down at Brize, they had about an inch of snow last night
Had a nice long lay in (Elaine its one of those days when you only see one 7 in it

Ventured out about 3 and walked slipped down to the shops with my rucksack to get some supplies in, Spuds, carrots, cabage, bread and..................... some liquid anesthetic.

Dont forget your supplies for when the bar shuts

on Sat nite before opening for 1/2 an hour

Now I'm not saying it is bad here in Lincoln, but the whole city is still grid locked (8pm) as the 3 main roads in and out are on hills. Had to take a long detour to avoid them. I had to select 4WD to get on the drive.

Terrible here. Roads closed, towns at a standstill. I'm having to walk/train/walk tomorrow as no way any of the cars will get out in this. Must have had about a foot or so over the last few days. Snowed non-stop all day today and more forecast for the rest of the week.

(no not the waist line

Just had a 2 day coarse at Canterbury,lets just say that the drive was "interesting",especialy the homeward journey.We now have about an inch on top of the cars here in sunny Hastings,so it could be an interesting ride into work to Eastbourne tomorrow especially as they forcast more of the same tonight (might be diggin' myself out in the morning!!).

We covered a fair few miles of country lanes last night, only about 4" of snow covering them, but quite a few abandoned cars along the way, probably because of the icy compacted areas, probably because some folks have absolutley no idea how to drive in it!

As soon as we got to the more used roads, there were queues & queues of traffic, and that was at around 7.30pm.... so back down the nearest lane we went!

I dread to think what the town centre areas would be like.

Phil was out yesterday afternoon/teatime delivering the milk around Notts, Newark & Lincolnshire. He said the roads were quite clear until he got to Fenella's Garden in Doddington, they'd had a bit more then their neighbours. He said that was the only time he was pleased he'd taken the HCPU, rather than the van.
Back at the farm, he decided to clear the drive using the Merlo, because the tractor couldn't get up the steep yard to the back fields. The drive was ok, but the yard was a BAD idea. I got out of the Land Rover and immediately slid on the ice that the snow had been hiding, I didn't get to take a step or anything. Even with my grippy soles, I was hanging onto the door handle to stop me going any further down the slope!

Thankfully, Albert stood his ground and stayed firmly where he was parked. Unlike many vehicles in the past that have just slid down the yard until they've hit one of the walls, the lorry trailer, or the hedge then the electrity box (now that was worrying time for Phil, I think he had to change his pants).

Well, we've had a tiny bit more snow in the night, and hopefully we'll get a bit more today... Around 6" covering the roads would be nice to play in, pretty please.

Hope you're all enjoying playing sideways Scamps in the snow

we wish you many more miles of it,
Elaine&Reg.

Spent yesterday in the works van on a nice road trip to Glasgow & back.

Left Birmingham about 4am & got back about 8pm, only hit a bit of snow in Glasgow on the M74.
Plenty of snow in the fields around scotland & the Lakes, but all the roads were passable.

Its great fun doing handbrake turns in a lwb van, (loaded with £30,000 of optical equipment)

This is Saturday morning in North Yorkshire (2010 RAC Rally) and the Fulvia never missed a beat. 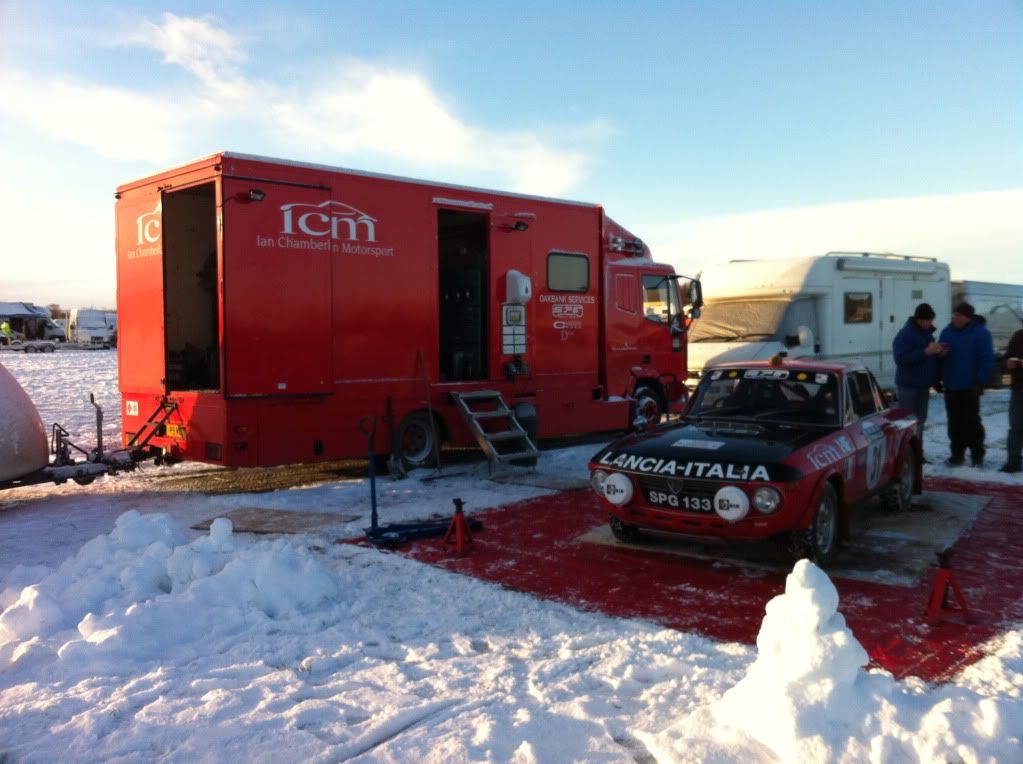 and this is my journey into work this morning. 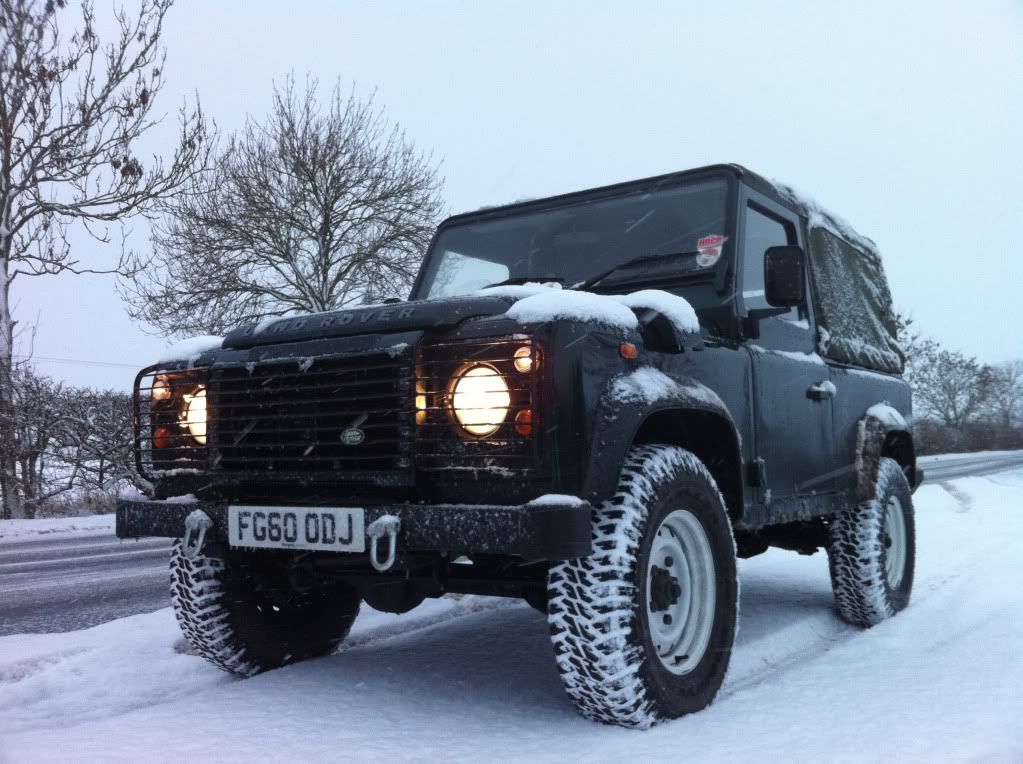 Your not supposed to drive on the pavements, just because they've still got snow on them !!

Your not supposed to drive on the pavements, just because they've still got snow on them !!

It's the only type of kerb crawling that Leanne will let him do!

I see you have fitted more suitable tyres for the snow - I assume the Carlos Fandango's are safely stored away ?

Martin &amp; Nettie wrote:I see you have fitted more suitable tyres for the snow - I assume the Carlos Fandango's are safely stored away ?

I think they came with it, Martin.

I've discovered that the Maxxis Trepador M8060's that my Jimny wears are brilliant in the snow.

And Reg's 110 is doing alright with the BF Goodrich MT's that were on it when he bought it.... But they can be easily provoked into a 4 wheel drift!

Umm, now there's a layer of ice under the snow these Mud tyres are not so much fun!

It's rubbish here in Chester! All we've had is a light dusting half an inch at most

Been bloomin' cold though BMW was showing 15degF on monday morning

TRR Motorsport wrote:Umm, now there's a layer of ice under the snow these Mud tyres are not so much fun!

Mine are still doing brilliantly.

And the Jimny didn't slide down the yard when parked up.... Unlike the Range Rover Sport. Cue owner frantically running back towards it, jumping in, continuing the now fully sideways slide, hedge getting closer, and closer, and closer....

and..... SAVED, by a frozen clump of mud that the tyre clipped, directing the vehicle just passed the hedge!


Gimme my Jimny any day! It might not look flash, or cool, but it certainly performs well in these conditions,
Elaine.


Mind you the girls at work have said it's currently -30°c in Poland *Bbrrrrr*
Elaine.

Not a lot in cumbria really ....very fun with bf goodrich mud terrains on though!!!! v grippy but you can persuade them to drift when you want them too. 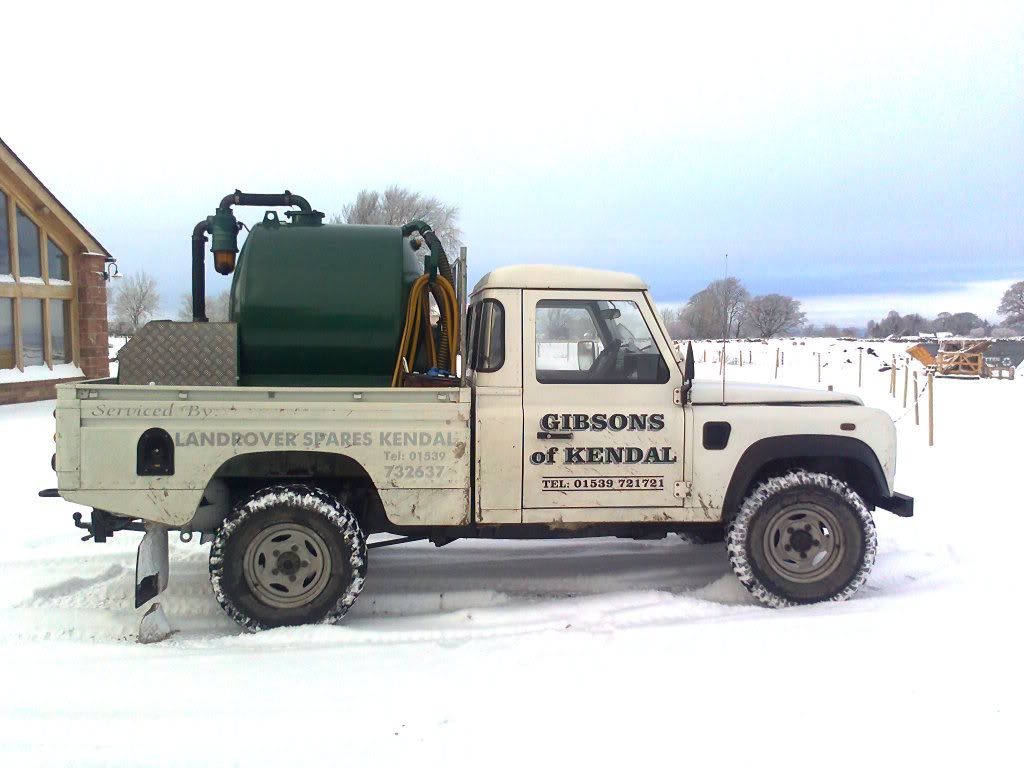 haha--- not much in Cumbria :-P
(go up to Penrith--- there was more than enough when I left (Tuesday night) :-D )
Nothing down at home though...

The accumulative depth of snow in our back garden is about a foot. Just spent 2 hours tonight shovelling snow off the drive. I've got about a quarter of it done

I need to get one of those plastic snow shovels. The bloody stuff keeps sticking to my concrete mixing shovel

Had a day at home today,the snow was that bad even the main routes in and out of the town were impassable,except if you had a 4x4,so I went out and bought a Discovery TDi for £400.00,a bit of a wreck but it certainly gets me about.It's a 3 door that's had the rear interior ripped out,the wings cut about and massive chunky tyres on it,you almost need a ladder to get in!! So I have now joined the Chelsea taxi brigade!!

A bit in the verges on the way up.

My loop road, off a loop road had a little bit compacted, but managed to turn up on to my drive off the sloping road.

Snow, what snow. I think you easterners are making it up

I will see for myself on Saturday, thats if it hasnt miraculously disappered

Anyway i thought youd just washed the Landie, I hope the off roading is a lot muddier than that.

Hey Chris, would that be tax deductable for recovery use

Havn't thought of that one Rob,I have thought about the potential of recovery work though!!

Is that someone recovering you

See you all on Sat