ANY DETAILS OF GT GYX712W PLEASE?

ANY DETAILS OF GT GYX712W PLEASE?

Hi Any one got any information/more pics on the only GT on the Scamp club picture collection?
How about some pics of yours Mac? Charlie? Brians scamp?-Red one with roof rack.
Do we know how many GT,s are out there. And did anyone see a GTr rear engined scamp? 4x4Rob.

It was Andrew Mcleans 1st GT, I remember Kieth Thingy from Stourport way had it for while and it went Orange hence Tango, Matt Smith had it stripped it down and sold it on - don't know where it is now 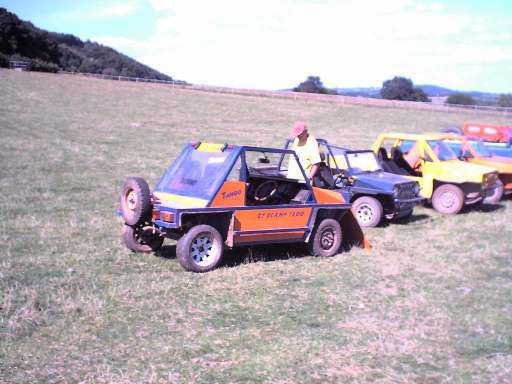 I think I have Tango or at least the bonnet which was orange with Tango written on it when I bought mine. It appeared on Ebay at the beginning of July 2008 being sold by Matt Smith. I wanted to get it as a birthday present to myself but landed up working away so missed out. Amazingly a month later it reappeared on the Bay but didn't met the reserve with me being the 2nd highest bidder. I emailed the seller to see if we could do a deal and we split the difference and off I trundled to Solihull to pick it up. The guy selling it was a VW fanatic and found out his bay pickup needed a lot of welding just after he bought the Scamp so sold it on again to raise some funds.

Since then progress has been slow with work, lack of cash and various house moves getting in the way. I'm hoping to get her finished over this winter but we're without workshop/garage space at the mo so need to get that sorted first. I have got the engine running finally (there's a thread on the technical board) and the rear has been stripped out with a plan to fit a fuel tank behind the seats, move all the rear lights in board (to keep the electrics nice and dry) and put a storage locker where the fuel tank used to be. Martin & Nettie's photo is interesting as I'd decided to mount the spare tyre on the back instead of behind the seats which seems to be where it was originally.

If anyone has any more photo's or info on the car I'd love to hear from you either on this thread or via PM. I've got bits and pieces about the history of the car but it'd be good to fill in some of the gaps. I'll post some photo's up tomorrow when I get a mo.

Similar topics
» Tried to get details about this 5000 on Ebay but no response
» FYI - 2012 FJ Cruiser Drivetrain details
» ROSSENDALE RAMPAGE 3 DETAILS..
» Craig Dootson, goalkeeper?
» armwrestling clubs in the uk