I expect your wiper blades are shredded like mine with all the ice we have had - I don't like paying Halford's prices for new ones and Bosch ones are even more expensive - Wilkinsons £1.77 for all sizes - at that price you can replace them twice a year

PS above for normal cars - Scamps are usually 12inch - Poundland have stopped stocking cut-to-length blades which is a shame.

Dont you scrape/ spray the ice off first

a. Being a short arse my Sorento is a bit big to scrape all the ice off the windscreen.

b. When I run out of de-icer I put the heater on full heat and wait for it to de-frost.

c. You probaly get drums of de-icer from your works gratis.

d. Don't be so cheeky sunshine.

e. I'll keep my tips to myself in future.

Thought you were in Copenhagen? maybe you are? my Sorento does have a part heated windscreen which defrosts the wiper blades so there Landrover man

Go to your local motor factor and ask for "Rainy Day" wiper blades,we have haggled a deal for £1.00 each(all sizes)so I am sure they should be around £1.50 without haggleing.They are made by Federal Mogal who also make Champion and Ferrodo products,we have had no returns so far and we have been using them for about 2 years.

Thats two money saving tips from both ends of the country, pity we can't do anything about the price of fuel - I've just paid 114.9 a litre for diesel - I'll soon have to get Nettie to keep the chip oil if it keeps going up

Martin & Nettie wrote:T pity we can't do anything about the price of fuel - I've just paid 114.9 a litre for diesel - I'll soon have to get Nettie to keep the chip oil if it keeps going up

Now, that's where having an older diesel pays dividends - 81p per litre for bio-diesel! (Have to mix it with expensive stuff at his time of year

but in the summer we run the Paj on it fulltime.

Just out of interest where can you get sunflower oil for 40p a litre? Best I've seen in the last 18 months is about 80p per litre for veg oil. Sunflower is usually a bit more expensive.

We buy our biofuel from a garage - all legit and above board.
As I said - our fuel is about 81p per litre - and sunflower oil in the shops is more like 90p a litre now isn't it?

Oops,guess who hasn't been shopping lately? As I said before,lot's of fors and againsts with bio fuel,speak to a diesel specialist and see what they say.I know that the Bosch agent we use is one of the againsts. Also,the small print in some new car warranties has a clause against payment if biofuels have been used.
Sorry Tony,I didn't meen to suggest that you were not buying it legit.We used to have a guy that came in with a Peugeot 205 who kept harping off how good his own mix was and how cheap it was,I always wondered if he ever got caught.I know that bio diesel has a bit of a "chip fat" smell but with this car you only had to hold your chips over the tail pipe. www.bbc.co.uk/insideout/london/series9/week_two.shtml
From click4warranty.co.uk the following paragraph
So what will the impact be on my car warranty?
Yes, running your vehicle on any fuel other than the recommended manufactures stipulated fule will most likely in validate your warranty! At this present time, most of the major car manufacturers do not officially support the use of bio fuels in their cars.

I'm waiting for one of these to come up on ebay 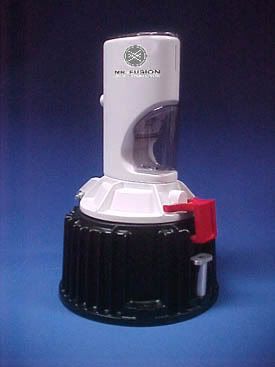 wezgit daan saaf wrote:
Sorry Tony,I didn't meen to suggest that you were not buying it legit.We used to have a guy that came in with a Peugeot 205 who kept harping off how good his own mix was and how cheap it was,I always wondered if he ever got caught.I know that bio diesel has a bit of a "chip fat" smell but with this car you only had to hold your chips over the tail pipe. www.bbc.co.uk/insideout/london/series9/week_two.shtml
.

No offence taken! Didn't think otherwise - and it takes a LOT more than that!!!!!

Actually, I'm not sure on the tax issues of bio. I know garages have to sell it at at least 20p a litre below the cost of 'normal' stuff because of tax allowances from the government but I also know that there are a lot of people making their own. Look up on ebay and you can buy the kits and instructions easily. There are even cooperatives set up to produce it which you can join for a certain amount a month. I really don't know how this is regulated.
You can also buy the diesel from suppliers in huge plastic containers to keep at home from about 60p a litre.


And both my Clio and the Paj are regularly run on the stuff now - yes and both smell like the local chippy! - as I say, the beauty of having old cars! (No problem with warranties when your car was new in 1994!!!!!!) Only downfall so far - regular fuel filter changes.

I'm surprised the Bosch guy doesn't like it as their fuel pumps are the ones usually recommended for old (i.e. indirect injection) style diesels running straight veg oil (SVO*). Avoid Lucas pumps as they can't handle the extra viscosity.

Modern direct injection diesels have to run proper biodiesel or else you'll kill the engine. Most manufacturers warranties exclude the use of diesel that is more then 5% bio and any that doesn't meet the European standard EN14214 but many of them use much higher percentage biodiesel fuels in their own car fleets. So make of that what you will.

The tax situation is quite complicated (no surprise there

). Basically the fuel duty on Biodiesel for road use is 20p/l cheaper then mineral diesel hence the cheaper prices at the pumps. If you produce your own biodiesel there is a personal allowance of 2500 litres per a year that is exempt from duty. Going to the supermarket and buying veg oil counts as production

This allowance was brought in as lots of home producers decided to play by the rules by paying the duty to HMRC for everything they made and HMRC eventually gave in under the mountain of paperwork it was generating. Nothing like beating people at their own game

I'm not sure what the current situation with co-op's is. When I was looking in to this a few years ago there was only one co-op in existence and the HMRC, environment agency etc were trying to figure out how to treat them. Once you get in to production for resale there's a whole raft of H&S, enviroment, waste certification, tax etc regs that come in to play that people making the stuff for their own use are exempted from. I'm guessing some arrangement has now been put in place if there are more co-op's in existence.

BTW Tony you shouldn't have to keep changing the fuel filter. Usually it needs changing after the first 500 miles and maybe after the next 500 but from then on all the crud that has built up in the lines when using regular diesel should have been removed. Most people then just change them at the usual service period.

Charlie - Who is now tempted to buy an old school diesel

*SVO is not technically biodiesel as it has not been processed to lower it's viscosity to that required by a diesel engine. There are ways round this problem though. The main two are 1) preheating the oil before it enters the engine in this way you can run 100% SVO and 2) mixing it with a solvent i.e. mineral diesel. Another alternative is modding the engine.

have had a bit of experience with this as we produced several thousand litres of bio diesel for our Bsc final year. we used oil seed rape and transesterification, basically cutting the glycerin off the oil structure and replacing it with methanol. this did two things.

brought the viscosity down to comparable levels with normal diesel down to temps of around 1-2 celcius, and it also brought the calorific content of the fuel (the amount of energy per gram) up to roughly 10 percent less than fossil diesel.

to be honest on small scale your probably better off just running heated svo.

our uni makes it out of rapeseed oil---
(get pretty bags of biscuit looking things after--- they were fun to play with!!!)

They were saying something about tryin to refine it (something like that) to make it useable on the newer landys (05 -ish- plate defenders) and some other vehicles, but at the mo r just using it in the old vehicles.

Went in to c were it was all bein made--- all scary and noisy!, but smelt nice!!! (and next to a pretty circular "low stress" cow shed)

Martin & Nettie wrote:I feel sorry for the people behind who think they are following a chip van

At least they are not getting gassed by emissions!!!!

All depends what it goes through before it gets to the tail pipe,egr - exhaust gas recirclatary and catalytic convertor,these were fitted quite early on.I remember John H's Ford Escort turbo having both(mind you we blanked the egr of to give it more umpf)