Nutton wrote:
Reg do you mean the Starmags? They're just some old wheels I've thrown on it because the tyres hold air.

I'm fairly sure this'll have Wellers in some shape or other.

Starmags with road tyres for show, Wellers with knobblies for off-roading.

It's been a while, so a quick update: Not a whole lot has changed.

Work is still getting in the way so I haven't had much chance to get on with this.
We do have had a big new garage built now though, and my dad has bought a 2 post lift. I can play at all times in any weather!

Finally no more trying to jack a car on gravel, losing screws, nuts etc in the gravel, and even laying on lego blocks probably would've been more comfortable than that bloomin gravel. :-P

...Aaaaanyyway I've have gotten some smaller jobs done. All the paintwork on the car is now done. The tailgate has been refitted, I tried my hand at arc welding and I've attached some beefy hinges which will also allow me to easily remove it if I need. 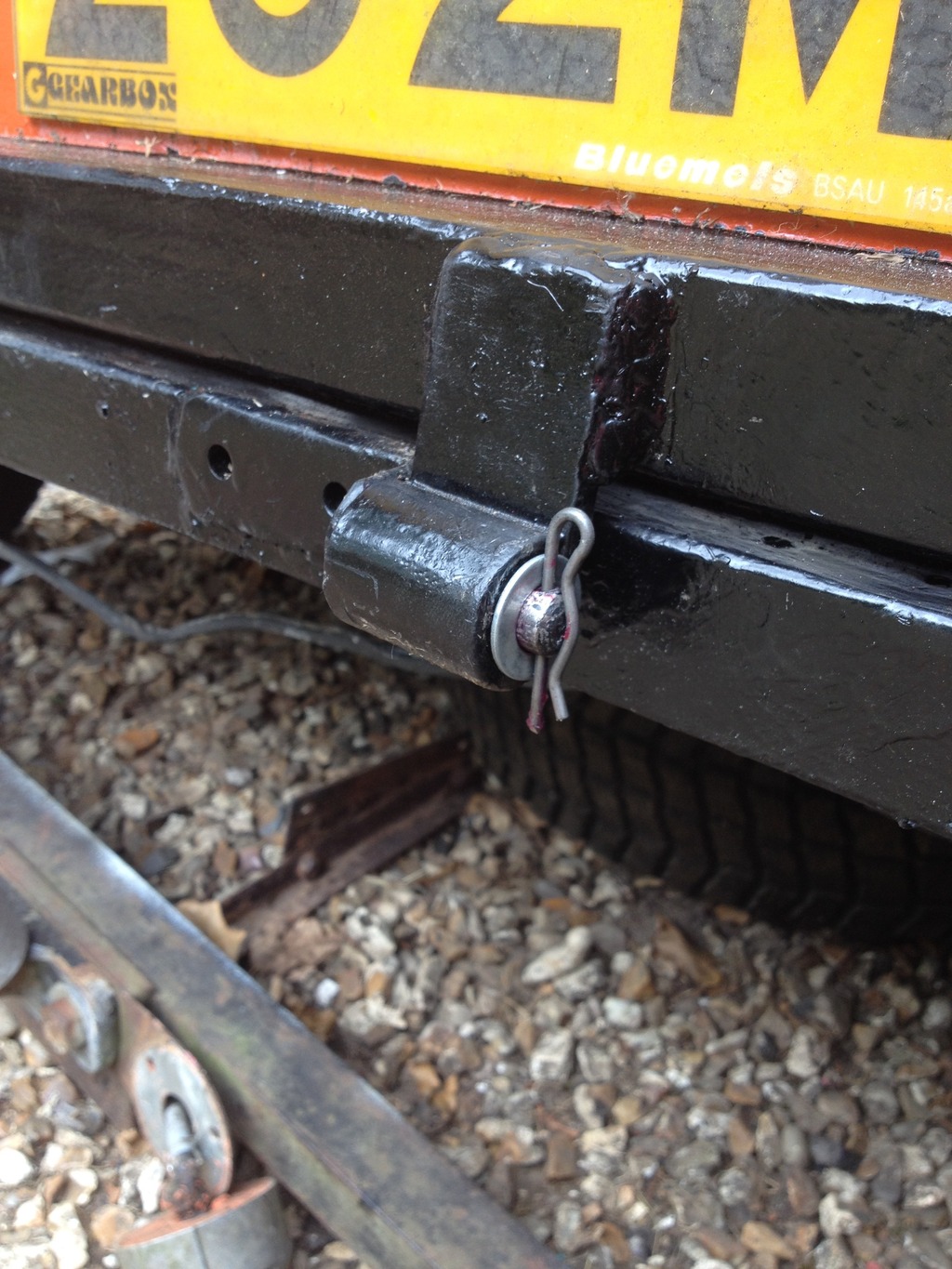 I made some new plates for the rear lights and have gotten them fitted. Since that photo, I have also sorted and reattached the rear bumper and tow bar. 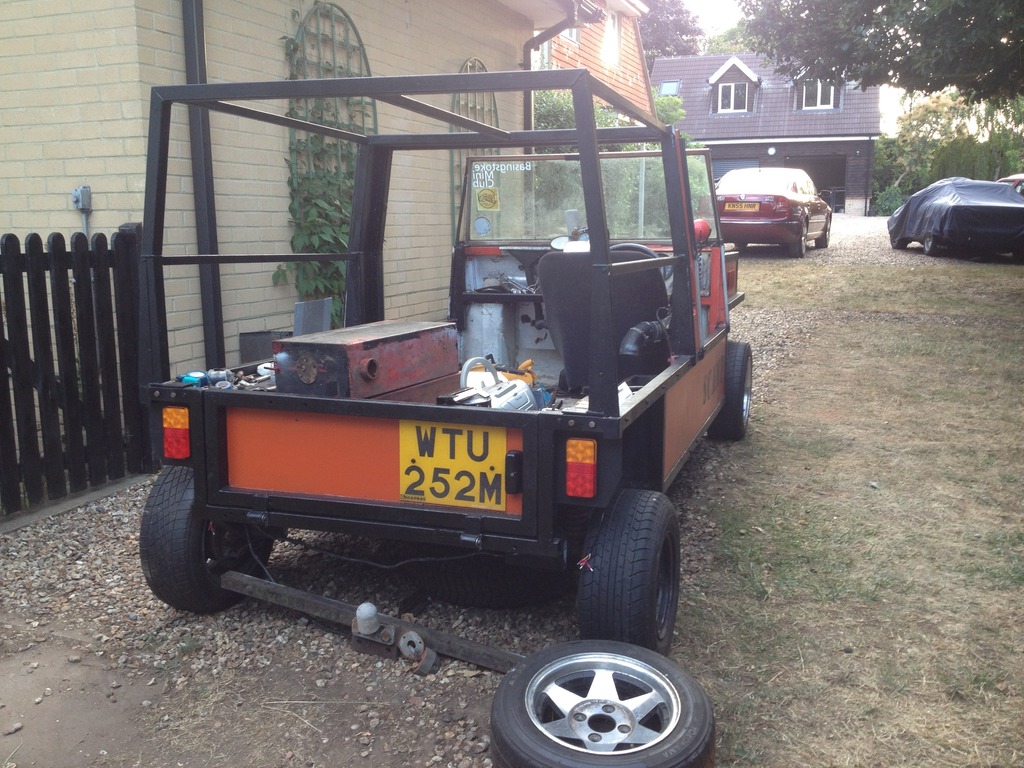 Ive fitted some good bolts (I got for cheap at a recent show) to the tailgate. 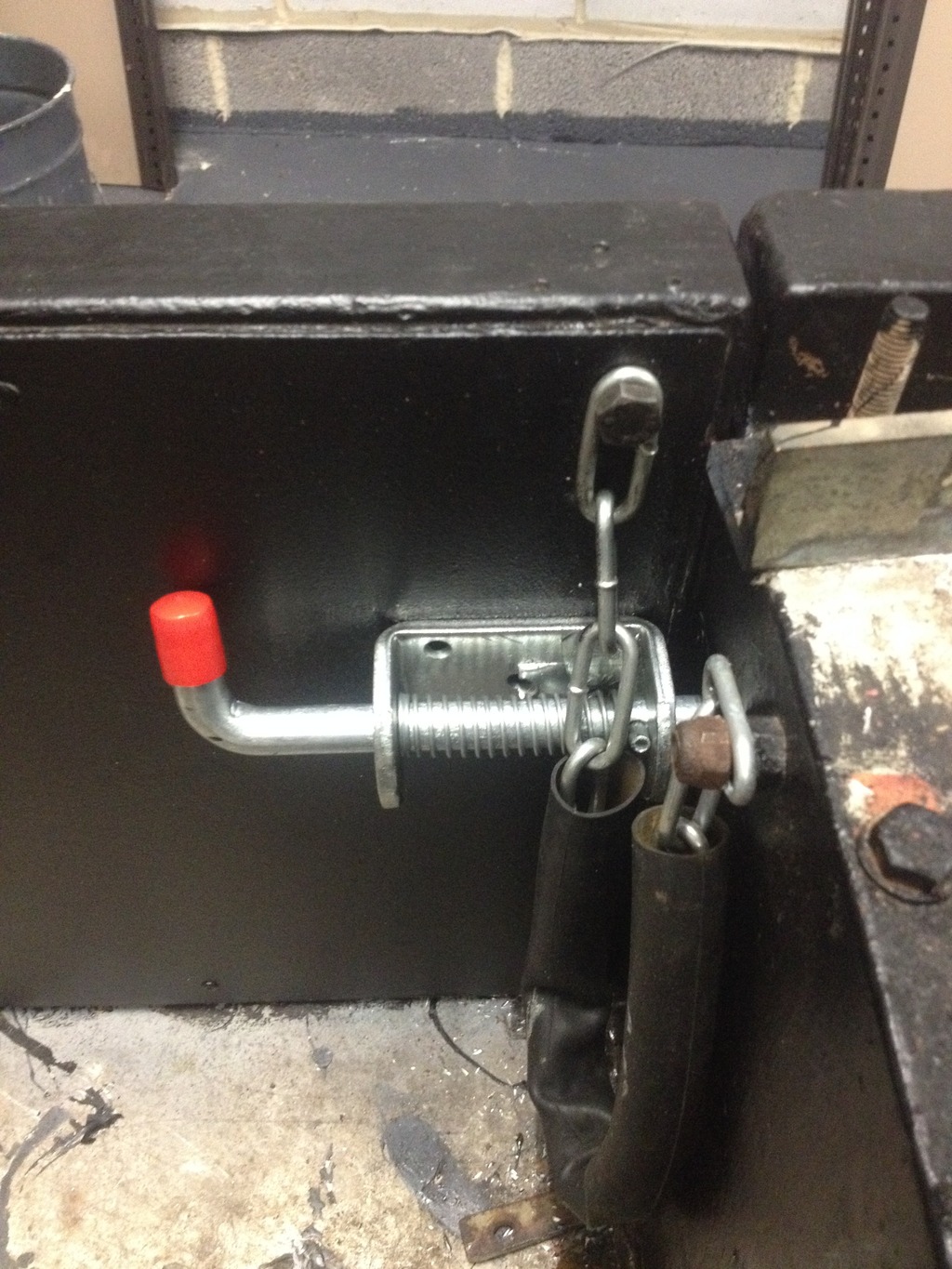 The car had a mini badge on the grill when I got the car but I wasn't too sure on it. I repainted it to match the colours of the car, while keeping the same design, much better! The Scamp letters have also been sprayed black and it's all been fitted now.
I went with black for the letters because I wanted them to be fairly subtle but I may repaint them anthracite grey or something instead. 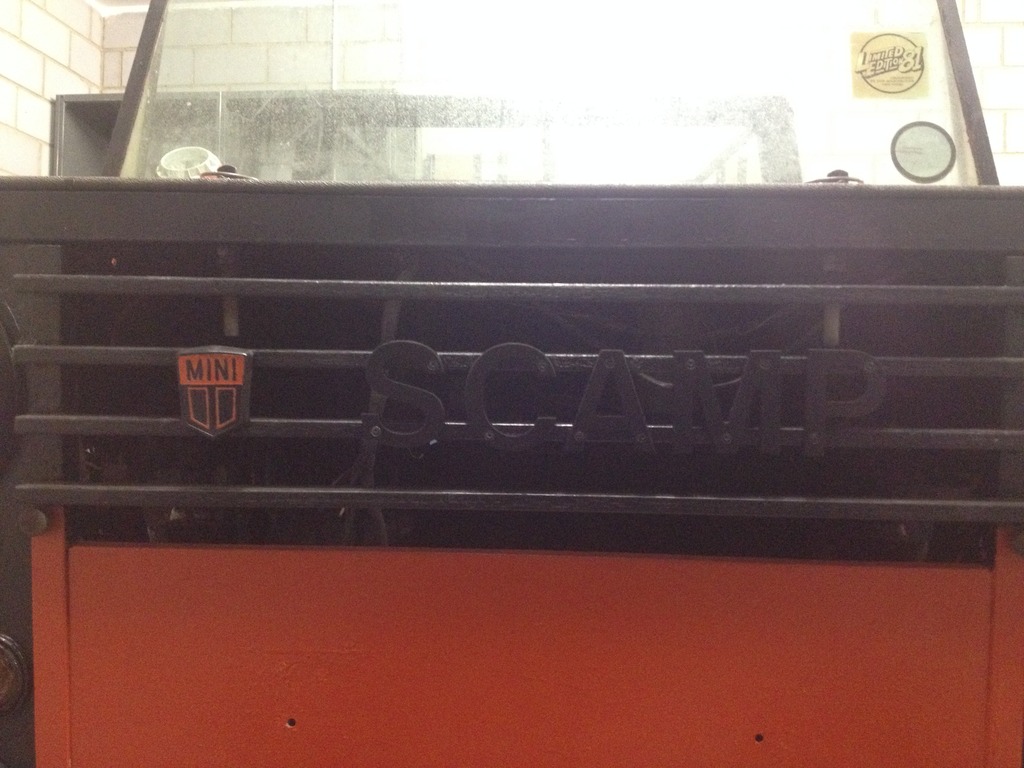 I've fitted some rubber matting on the floor and put some thicker matting in the load bay.
The car also came with a second fuel tank but it had never been fitted so I've gotten that in place and made a retaining strap for it to match the other side.
I've got no photos of those right now though so I'll grab some later.

I spent today quickly checking the engine then stripping the paint and redoing it.
My plan is to drop it into the car then find out if it's any good.

The guy who sold it said it was a good engine and he did seem like a genuine guy, so fingers crossed!
It's a 998 with a 12g295 cooper head and I think he said something about a big cam. I have an HIF38 with an Innocenti filter I'm planning to use with it.
I'm hoping to get it dropped in by the end of this week.
If it does turn out to be useless for whatever reason I do have a late cooper 1275 which needs a rebuild... It was destined for the mini buuuuut....


I had hoped to make this years picnic but clearly that's not happening, so I'll just have to make next year instead.

Looking good! I wish my car was this far along!

Regsmonster wrote:Looking good! I wish my car was this far along!

Thanks, I have been spending most of my spare time on the bloomin thing to get it there though

A photo of my new flooring and the fuel tanks! 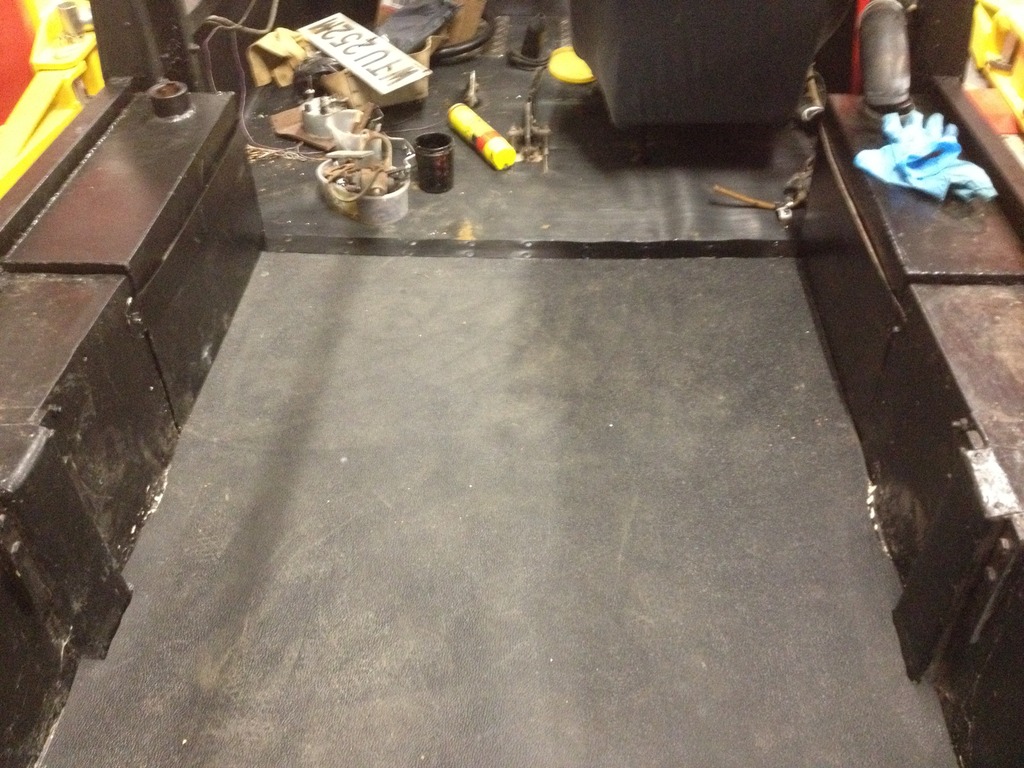 And the engine has had some paint slopped onto it! 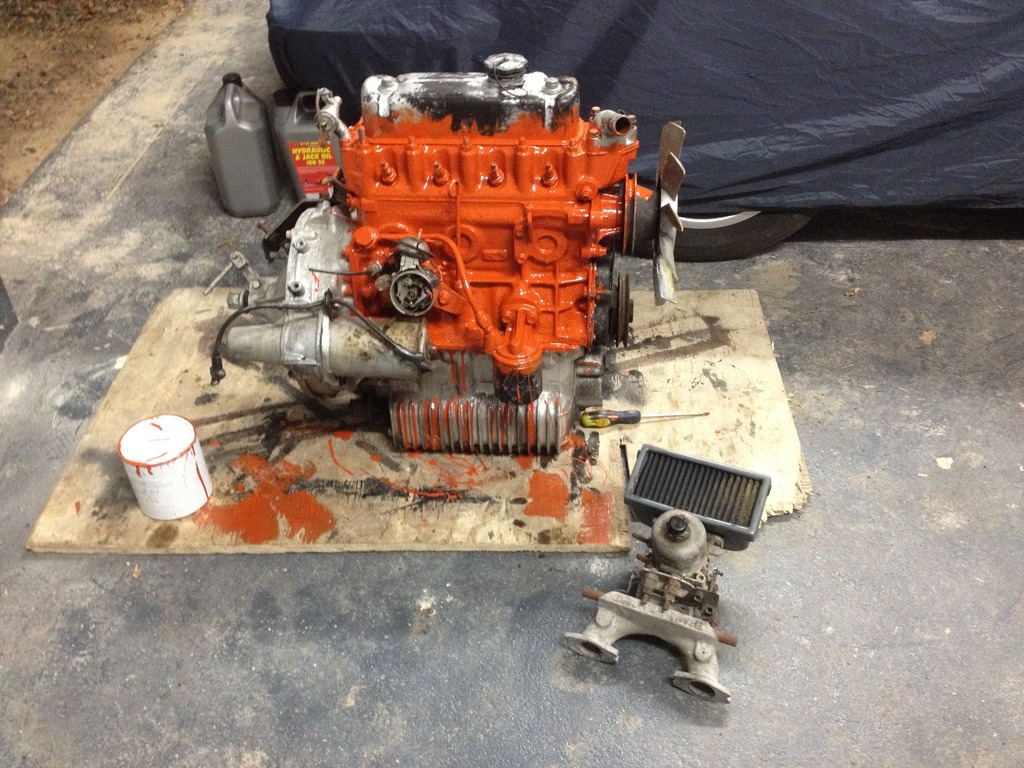 Regsmonster wrote:The plot thickens, no mention of him winning best of the bunch or even best mk2 here.....

Brilliant! Thanks for checking that, It's nice to have that mystery solved.

Quick update:
So I misjudged the rear light plates.
There's plenty of clearance with the 12s but those 13s got too close. They fouled on the plate when the suspension travelled up.
I've moved the lights up as far as they would go and I've cut plenty of material from the bottom of the plates. Problem sorted, I just wish I had test fitted the 13" with those plates earlier. 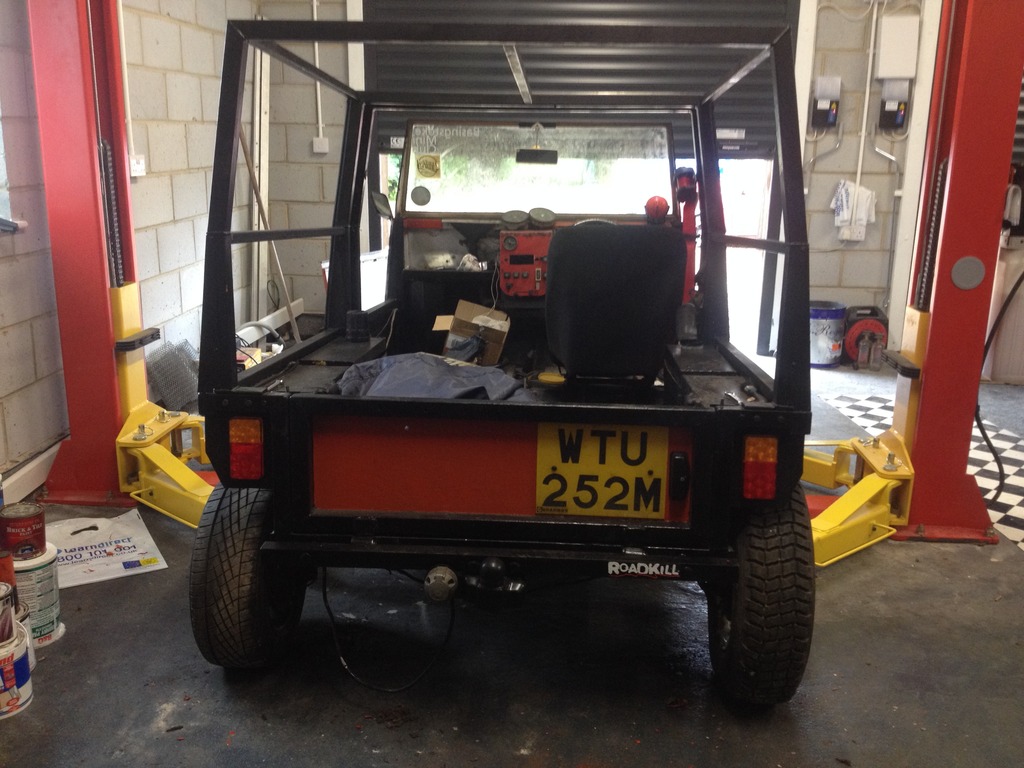 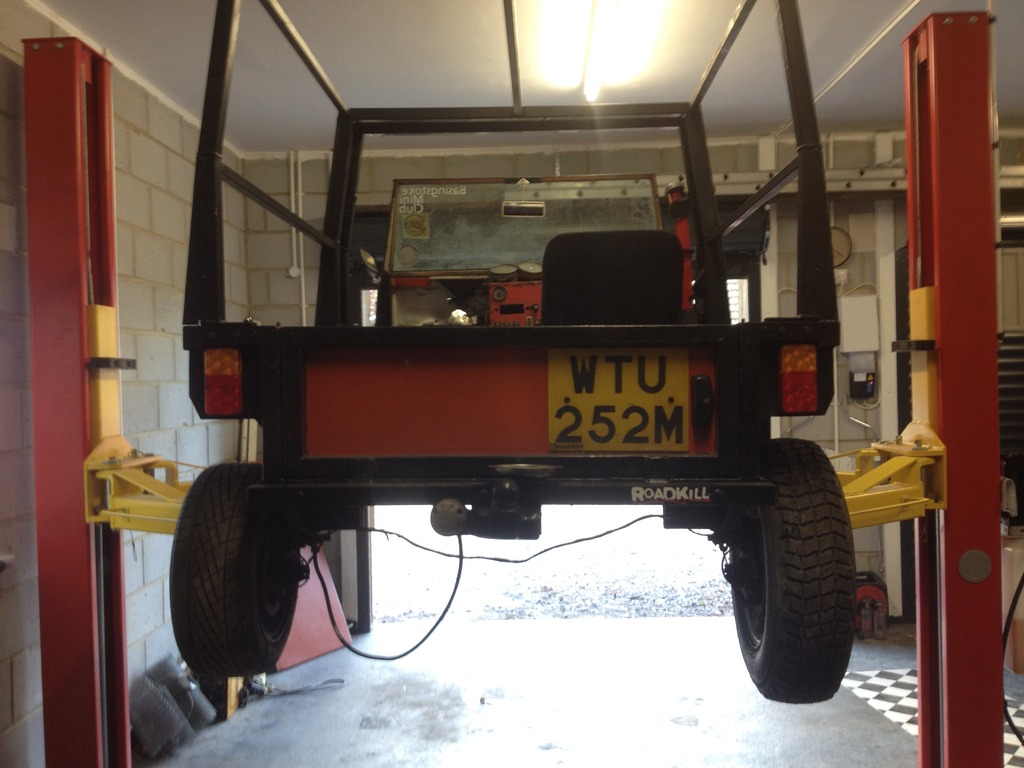 I have the day off tomorrow so I'm hoping I can get all the brake lines sorted, maybe get a new master cylinder on, and if I can get some, perhaps fit some new handbrake cables.

I still have to drop the engine in, sort the brake lines, etc.etc. but I have my priorities straight.
I've painted a rocker cover. 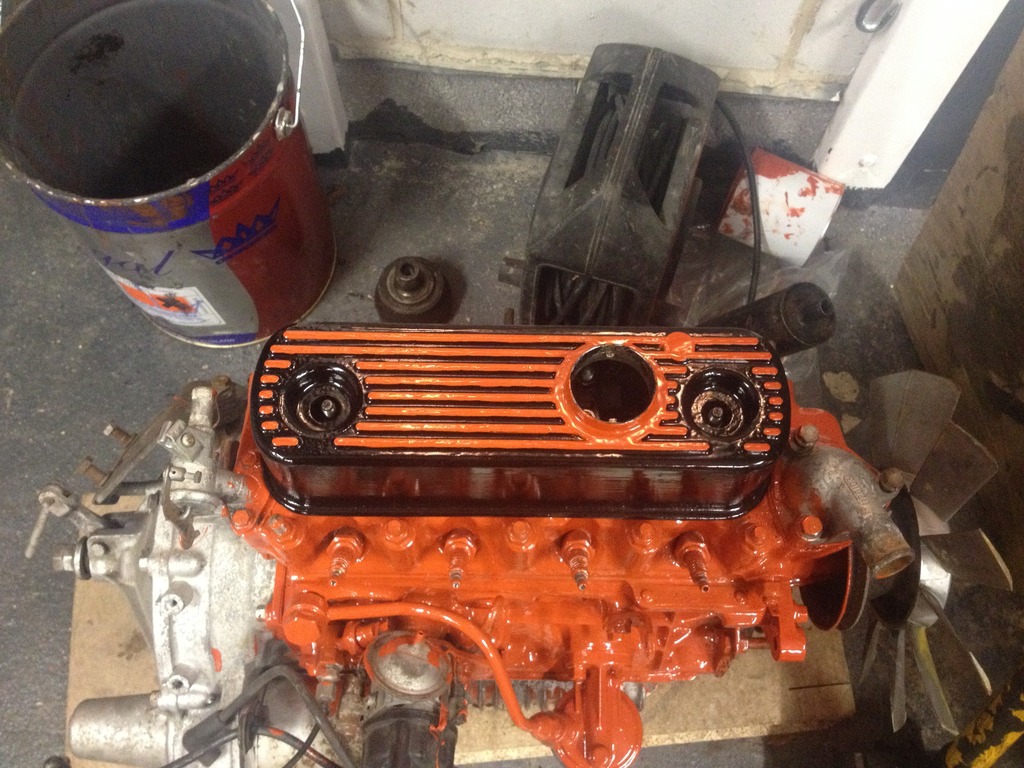 It's been a month since the last update, so here we go.

All the brakes are done, new lines, braided hoses, new brake and clutch master cylinders.
The handbrake cables have been replaced.

At the Castle Combe show I may have bought some Billet DSN bling bling.. 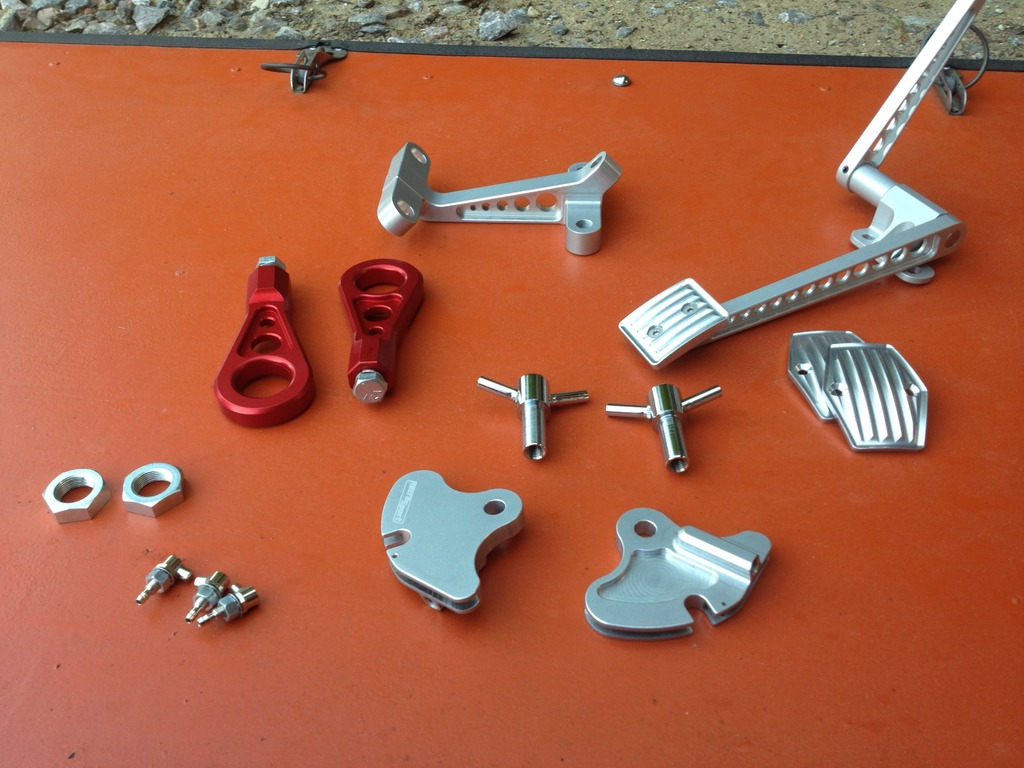 That's all been fitted now too.

I picked up some more wheels at a mega-bargain from 'exetreme offset'. I'll use these for offroading. 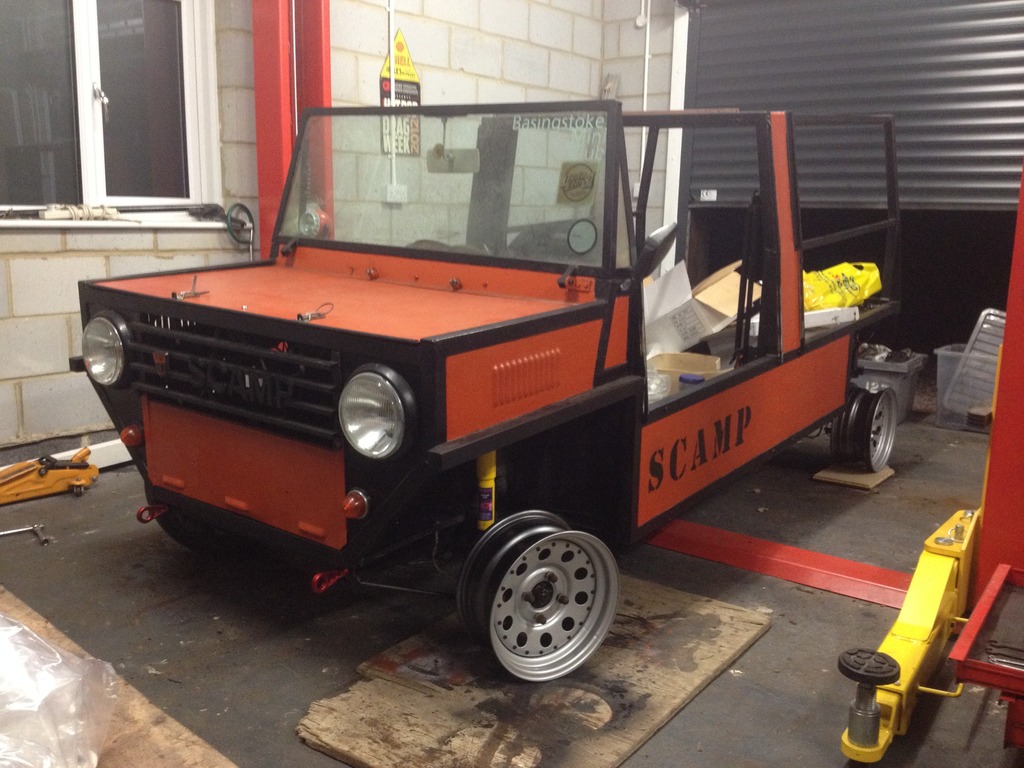 The seats and belts have been installed.
To comply with the more recent MOT specs. I've fabricated some catches for the seats to lock them down. 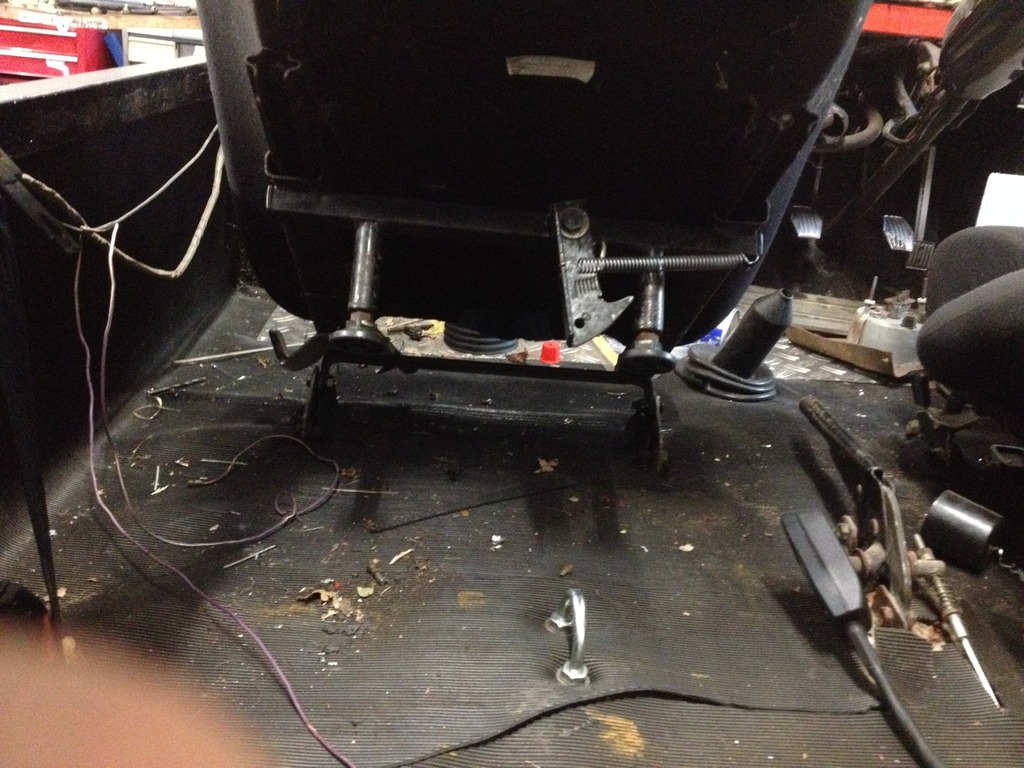 I've also put a U-bolt in each corner of the load bed so that I can easily strap stuff down.
There's probably more but I can't remember anything else.

It's getting soooo close!

Off of the top of my head the only remaining things I need to do are the fuel lines, engine in, sort the dashboard, battery in and check the wiring is all working.

I do want to get an RAC Dural sump guard for it.
On minis if you install a sump guard you really need to use an oil cooler as well. The guard stops all the airflow that should go past the sump.
Is this a problem with Scamps too? Are any of you running guards with no cooler and no problems?
Because of the different body and more engine bay space I wonder if it would still be an issue.

As you haven't got any holes in the lower front panel, you might find it over heats anyway.

Regsmonster wrote:As you haven't got any holes in the lower front panel, you might find it over heats anyway.

Oh, really? Is it a common problem then?
Maybe I'll leave it and see how it goes to start...

Regsmonster wrote:As you haven't got any holes in the lower front panel, you might find it over heats anyway.

Oh, really? Is it a common problem then?
Maybe I'll leave it and see how it goes to start...

Yup. Lots of MK2's have various mods to help direct air to the radiator. Though your's looks like it's had three louvered vents added to the ottom of the front panel???

A two-stage radiator setup - one at the front and one at the side - worked well on mine, once I'd got it sorted out. 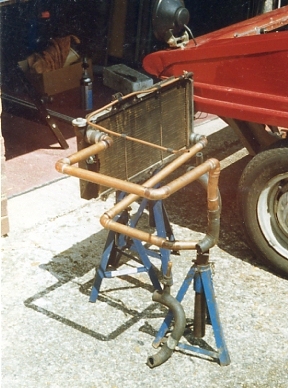 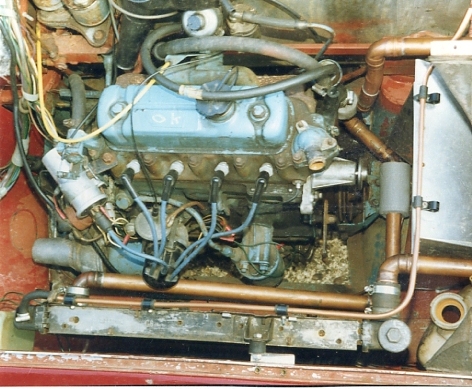 Or fit an aux elec fan

Alloy Side mount and electric fan has been fine for the 1380 mk2 switzerland and back italy and back and lithuania and back.......

Thanks for the advice, when it's done I'll test it as it is and go from there.
I've got a Fletcher 2 core rad and a steel 6 blade fan for it, I'll probably get an aux fan too.

Or maybe I'll drop a different lump in altogether! :-P 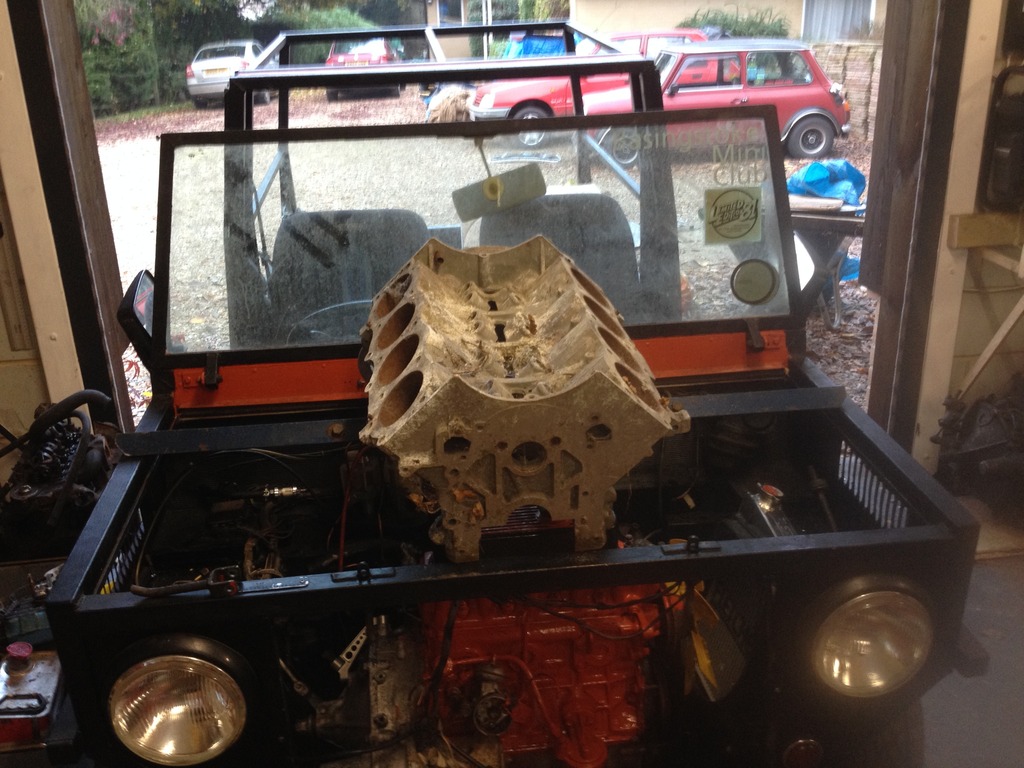 Is the best thing to do with a Scamp, I've never had any overheating problems with mine.

Well since the last update the engine(s) in this car have had me on a rollercoaster ride.
That first engine never ran properly and burned loads of oil, after checking/regrinding the head and valves, I decided that the rings were gone (despite fairly good compressions). Out came that lump and I stole the engine from the mini, another 998.
I also took the cooper head from the first engine to put on it.
I know the mini's engine is good, but it still gave me all kinds of wierd problems.

As of a couple of weeks ago, after much cursing, experimentation, a few new parts and still not the foggiest what the problem was, the engine was running fairly well.
I think the inlet manifold and/or cooper head might have been doing something really odd. (there were no air leaks in the manifold) Once I changed to the original head, it was a bit better, and better still after using a different manifold.

Cut to this morning, when I got up faaaarr too early to drive the car to the MOT station....
It passed! Hallefrickenlujah.

I soon started driving it around to check it out and enjoy it on the road.
I knew that it was going to be slower than the mini but I'm dissappointed by how under-powered the 998 is in this car.
The same engine in the mini could break 90mph (indicated)
Driving it earlier, it accelerated well, but was a push to reach 60mph and at times it was a struggle to hold 50mph, with a headwind. 4th gear was almost useless.
No problems with overheating yet though.
So it looks as though that Cooper 1275 will be getting a rebuild much sooner than I had planned.

In the meantime I'll just enjoy the car as it is and not make any journeys that are too far!
I've been dropping all of my spare time into this car over the last couple of months, to get it sorted in time for the Brooklands New year show. I'm chuffed to have managed it and will make that my first show with the Scamp!

Good to hear you now have an MOT !

Is the lack of speed down to the bigger wheels or the square front of the Scamp ? They wheels will affect the gearing quite a bit so the engine will struggle more and the speedo will be out a fair bit as well.

Good excuse to fit a larger engine though !

Nope it's just on 12" steelies at the mo. the same size the mini was on originally.

Last night we threw together a last minute fabric roof incase it rained. The fabric was useless it's already torn and stretched but it did it's job well, so I'll grab some proper material and remake it to the same design.

The New years show was great!
The engine started playing up a bit on the way home though, so rather than messing about, I've sourced a running stage1 1275 from a friend that I'll collect and drop in sometime in the next few weeks.

A Scamp member put a photo on the Facebook group so I've stolen it to add here: 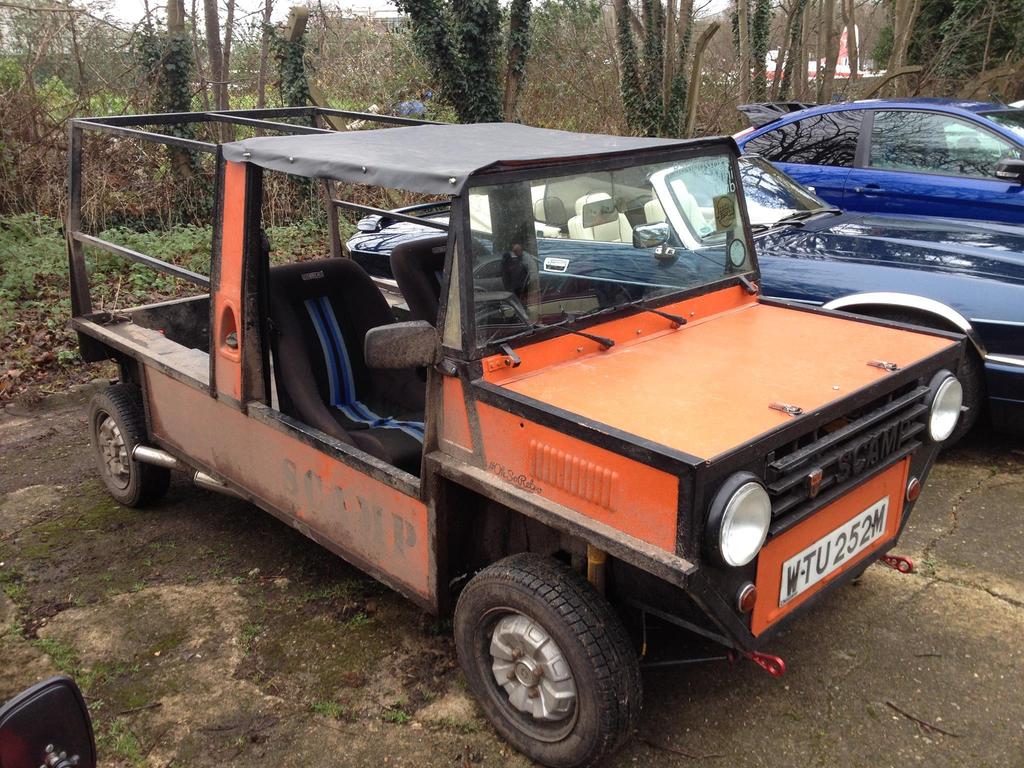 The wheels won't be making much difference then, I thought you had the bigger 13" ones fitted.

Well done for getting it to the show though. 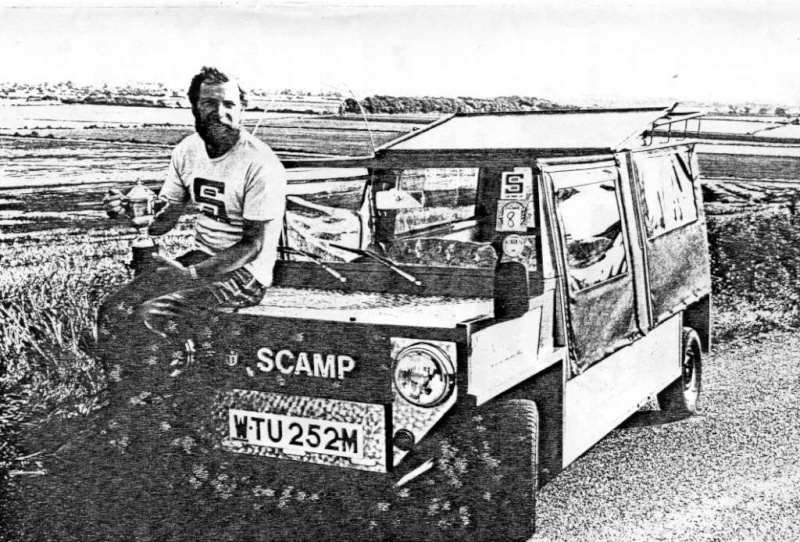 Thought you would like to know your Scamp built by Melvin Freestone won Best Of The Bunch trophy in 1982.

Just been through all your posts and it looks like you already have Melvin's Best Of The Bunch photocopy.